The Place We Left: Land Acknowledgement

The creation process of The Place We Left is occurring on the unceded territories of the hən̓q̓əmin̓əm̓ speaking peoples, which were never surrendered, negotiated, or ceded to British Columbia or Canada, and where I am a settler. 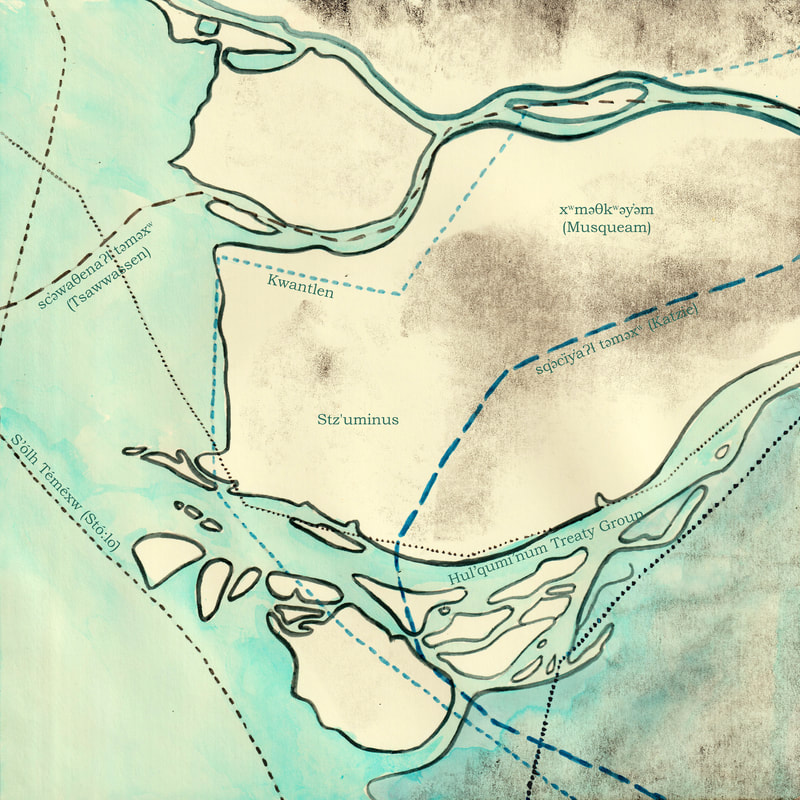 In a discussion on land acknowledgements led by playwright and actress Quelemia Sparrow, an observation emerged that because land acknowledgements are becoming so commonplace, they can begin to feel rote or even thoughtless. Quelemia encouraged the emerging artists present to consider how we can apply our creativity and innovation to these moments, to bring larger impact, deeper consideration, and personal experience to the process of crafting a land acknowledgement. In a workshop I recently attended on anti-racism in the classroom led by consultant, facilitator, writer and artist Cicely Blaine, decolonization was framed as “the personal, political, and poetic process of unlearning, unpacking, and disconnecting from colonial mindsets, practices, and structures.” The idea of applying poetics to the process of decolonization resonated for me in connection to Quelemia’s words about bringing the creative skills we already have as artists to land acknowledgements. I was also inspired by artist Barbara Meneley’s piece Unmapping Assiniboia: “A series of cartographic pieces that focus on structures of colonial claiming. Working from archival settlement maps, I draw, reproduce, and then erase the colonial tracks, digging out the grid, the railways, and the names. This is a process, a ritual of undoing. The pieces show the scars, the detritus of removal, while imagining a possible decolonized land.”

Because The Place We Left is in itself a mapping process, and because I often use elements of cartography in my practice, I decided to create a land acknowledgement for this project in the form of a hand drawn map of the place I live and work, showing the intricate overlapping nations on which this project was created. https://native-land.ca/, an online map of traditional Indigenous territories, was an invaluable resource in the creation of the above drawing. It is important to acknowledge that while this project is titled The Place We Left, this map represents not only the past of this place, but also the tangible present and future of this landscape. It is also important to consider that the concept of traditional territory in itself is complex and ambiguous. In an article titled "What is Territory," Victor Temprano notes:

"I’ve learned that the idea of ‘traditional territory’ is actually very slippery. It can mean a strongly defined official boundary (Squamish nation, for instance), a general sense of land familiarity or habitation (some Métis people), a historically inhabited area, or it can be shorthand for how people identify themselves. [...] In fact, I’d say that the idea of traditional territory should be slippery, because it’s about land and culture, and these things can’t be defined by simple categories. Otherwise, it becomes too colonial again and forces identities onto Indigenous people, who, like all peoples, have diverse ways of understanding the self."